Press reviews of some of our past concerts:

Three titans of the classical repertoire were given a gutsy and impressive workout when Bristol Concert Orchestra took to the stage at St George’s in Bristol on Saturday 25 June 2016.

Under the assured direction of conductor Stefan Hofkes, Bristol Concert Orchestra has firmly established itself as one of the preeminent ensembles in the city…

Fine interpretations of music by three classical behemoths from this consummate, burgeoning orchestra.

Bristol Concert Orchestra is one of the largest and most versatile orchestras in Bristol. In recent years, under the expert direction of Stefan Hofkes, it has built up an excellent reputation. His programmes always prove to be challenging – any Mahler symphony is a challenge and here he undertook the mighty 9th with an orchestra of over 70 players…

Stefan held the orchestra together brilliantly and everybody deserved the tumultuous applause received.

Before this Eloisa-Fleur Thom (violin) gave a stunning performance of the two lyrical Beethoven Romances. She also showed us her technical skills in Ysaye’s tricky Sonata.

Conductor Stefan Hofkes gave the audience a clear view of this concert from the beginning warning them that Mahler’s Fifth Symphony, the focal point of the evening, was a work of considerable ferocity, so be prepared.  Any musical relaxation therefore had to be gained in the first half of the concert through Sleigh Ride by Delius and Tchaikovsky’s Variations on a Rococo Theme.  Cello soloist Joseph Spooner joined the Orchestra for the Tchaikovsky variations in a partnership which came together immediately.  As warned they came back to face the more serious thought provoking part of the programme, Mahler’s compelling Symphony No 5.

A comparatively gentle introduction via the Funeral March gave way to a movement described as being stormy, moving, and full of great vehemence.  Not surprisingly at the end of the movement the conductor, immersed in the music, had to remove his glasses to de-mist them.

There were moments when the intensity in the music overcame the players, but they were obviously enjoying this exciting challenge, and communicated this to their audience.

For their last concert of the current season Bristol Concert Orchestra chose an evening of fantasy and adventure.

Starting with Sibelius ‘En Saga this piece was written in 1892 and the composer conducted the first performance in Helsinki in the following year.  It is in five sections starting with some swirling sound effects in a slow introduction.  The tempo increases before a rather plaintive moment is followed by a faster movement which takes off “with the speed of light and a cloud of dust.”  The finale finds the composer in a despondent mood.  The orchestra covered the various feelings very efficiently.

Max Bruch is mostly famous for his first violin concerto but his Scottish Fantasy is becoming equally popular.  Completed in 1880 it was dedicated to the virtuoso violinist Pablo de Sarasate.  The four movements are based on Scottish folk melodies and he gives a prominent part to the harp (expertly played by Julia Hammersley) in paying homage to Scottish tradition.

The emotional heart of the work is the Andante beautifully played by the soloist Alexandra Wood.  The main theme of the finale is the unofficial Scotland national anthem “Scots, Wha Hae” and the whole piece ends triumphantly with some powerful playing from the soloist who overall gave a stunning performance.

Ravel’s Daphnis et Chloé Suite No 2 is the second suite that he constructed from the ballet score.  He used three selections opening with the lush scoring of Daybreak in which the strings were superb.  The music then builds up to an exciting climax in which all sections excelled.

The Suite from Howard Shore’s music from The Fellowship of the Ring was a pleasant way to end the very successful concert.  Stefan Hofkes, as well as directing his players with great skill, gave each some interesting introductions.

“Throwing caution to the wind to play with passion”

Peter Ustinov once scored a big comedy hit with his recording of Mock Mozart, in which he mimicked the sounds associated with the great composer.

The first half of this concert could well have been subtitled “Mock Mozart”.  Not because of any lack of musical quality, but because of the doubts about how much of the music we heard was actually composed by Mozart.

Jacques Ibert’s Homage à Mozart had much in common with the Ustinov, evoking many of the master’s themes for the pure fun of doing so.  As conductor Stefan Hofkes told us, in one of his witty introductions, legend has it that Mozart destroyed the original copy of his Sinfonia Concertante for wind quartet and orchestra, after a row at its first performance.

How much of Mozart’s original is in the work as we now know it may be questionable.  What was not was the sheer joy that Nicholas Shipman and Friends experienced in playing it, and passed on to the audience.

Their exuberance paled into insignificance however compared to the all-out attack Stefan Hofkes and the orchestra launched on Shostakovich’s Symphony No 10 in E minor.  Having warned us that they intended to go for the exhilarating second movement regardless of the consequences, conductor and orchestra proceeded to do just that, throwing caution to the wind.

At times the playing became a little ill-disciplined, like children let loose in a toy shop, but the passion and enthusiasm on display carried the day. In contrast, the subtleties of some of the other passages did not escape the conductor or orchestra.

Bristol Concert Orchestra always produces enterprising programmes.  In March we were treated to the rousing Resurrection Symphony by Mahler.

On Saturday we had a spectacular evening under the title The New World with mainly American music.  Beginning with Barber’s First Essay, the strings open up in the lower register and build up, with some sumptuous tunes until the other sections of the orchestra enter for a grand climax.

Taiwanese pianist You-Chiung Lin was the superb soloist in Rachmaninov’s Paganini Rhapsody.  There was weight, delicacy, colour and energy in equal measure in this magical performance.  The theme is from Paganini’s A minor Caprice for solo violin and there are 24 variations.  Particularly effective episodes are No 7, which uses the Dies Irae chant, and the famous richly scored 18th, which was played with much feeling.  The whole performance was one to savour, being both thrilling and yet unsentimental in the quieter passages.  The orchestra proved to be able accompanists.

The all-American second half began with Gershwin’s rarely heard Lullaby for Strings.  The beautiful tone produced was a credit to the players.

In Aaron Copland’s Rodeo – Four Dance Episodes – Buckaroo Holiday they straight away established a vision of open spaces and clear blue skies.  The two middle passages were wonderfully impressive before the exciting Hoedown brought this concert to a lively conclusion.

Stefan Hofkes, with his informative introductions to each piece, was once again the impressive conductor.

For the first of Colston’s School’s Tercentenary celebrations, the Choral Society combined with singers from Henbury and Thornbury to perform John Rutter’s Feel the Spirit, with its splendidly quirky harmonies.

Different styles of Negro spirituals held the audience’s attention throughout.

The honeyed tones of soloist Joke de Vin in Steal Away contrasted with the more upbeat, toe-tapping tune Joshua Fought the Battle and the joyful Feel the Spirit.  Deep River showcased the complete harmony of choir and soloist before ending with the rousing finale O When the Saints.

John Shooter was the excellent conductor in this part of the programme.

Mahler’s Resurrection symphony is a monumental work, which this group of amateur musicians took in their stride.

Stefan Hofkes, the inspirational conductor, only had eight rehearsals.  Consequently this was a marvellous performance of full bravado playing, especially from the augmented brass section.

After the funereal opening, there follows a graceful Ländler, which is an elegant, charming and beautifully scored minuet.  The wistful Scherzo, based on of the composer’s songs, leads into the Ulricht in which the light and depth of the folk-poem was impressively portrayed by Ms de Vin.

This leads without a break into the epic finale with a tempestuous outburst of orchestral sound.  Colette Lam (soprano) joined the contralto in some passionate singing.  The chorus was completely convincing and reached a thrilling climax with orchestra and voices powering their way to the final chord.

Stefan Hofkes is to be congratulated on achieving such a wonderful performance. 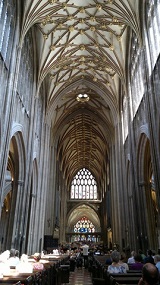 CANCELLED
Regretfully, we have had to cancel this concert because of the Covid-19 situation. All booked ticket monies have been refunded. We might hope to stage this, or a similar, concert some time in 2021, so do look out for news.


Read more about our concerts...

Get news of Bristol Concert Orchestra events direct to your inbox by signing up for our email newsletters (regular concerts) - never miss a concert again!

We will not bombard you with emails and will never share your details with anyone else.